I saw this on Pinterest and not only is it quick & easy to make, it is sinfully delicious without being heavy in calories or carbs!  Thanks go to The Sugar Free Mom, Brenda Bennett, for this wonderful, easy to make, treat!

I came across this recipe on Pinterest and am so excited to try it.

I have a tree bursting with Meyer Lemons in my backyard and just got a fresh delivery of Medjool Dates from Hadley Fruit Orchards in Cabazon, CA.  I can’t possibly ONLY drink date milkshakes (although I’d love to try), and I need to find a way to get more turmeric, with it’s anti-inflammatory gifts, into my diet, so this is a win-win.

I may even make a batch that substitutes blood orange for the lemon because I also have a tree full of ripe Blood Oranges. #CaliforniaGirlCitrusProblems

In the ginger family, turmeric is used to flavor both sweet and savory dishes in many different regions’ cuisines: South Asia, Southeast Asia (Vietnam, Cambodia), India, Eastern Asia, the Middle East, Iran, South Africa, and Thailand among others. In Medieval Europe it was known as Indian Saffron because it was used as an alternative to the more expensive and harder to get spice.

Anyone who has tried to diet, lose a few pounds, or who just wants to cut down on the many, many carbohydrates in the average American diet has likely heard of substituting white rice with cauliflower grated down into a low-calorie, gluten-free rice substitute that is also a good source of protein, fiber, and vitamins C, K, and B6.

I have yet to master “cauliflower rice.”  The methods I have used so far have left me with either a pile of mush (something close to Cream of Wheat) or rock hard mini chunks that in no way resemble rice…UG!

Thankfully the test kitchen at epicurious.com did the hard work of trying out the many methods we’ve all seen on pinterest and gave us the method that they found to be the best tasting and closest in consistency to rice so that home cooks like me can stop screwing it up so badly.  The one thing that they did note, for consistency, was that they added olive oil to all preparations (except raw). 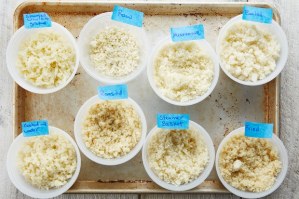 The following is taken directly from the article found at http://www.epicurious.com:  The Best Way to Make Cauliflower Rice; by  KATHERINE SACKS 04.22.16

They tasted the grated cauliflower in its natural state, as it is sometimes added to couscous-like salads raw and simply tossed with a rich, acidic dressing that helps break down some of its tough structure. But although the raw form is the easiest—no cooking required—it had a crunch that was too vegetable-like to approximate rice.

Epinion: Raw cauliflower rice is crunchy, and works to add texture to a salad, but it doesn’t mimic cooked rice.

Steaming the grated cauliflower is the most minimal cooking process. But since the cauliflower granules are so small, they had to use several layers of cheesecloth to hold the cauliflower in the steamer basket. The texture here was great, and the flavor was clean and fresh, very similar to the blank canvas of white rice. But removing the tiny cauliflower pieces from the cheesecloth was a pain, and some cauliflower rice was lost in the process.

Epinion: This process yields great results, but it’s too fussy.

They then tried steaming the whole cauliflower florets first, using a traditional steamer basket set into a medium-sized pot. Once cooled, the cooked cauliflower was grated. Although this greatly simplified the process, the cauliflower rice tasted waterlogged and was mushy.

Not wanting to give up on the ease of water-cooking, they tried dunking some of the grated cauliflower in a pot of boiling water and then in ice water to try out quick-blanching. But yet again, the cauliflower rice was wet and squishy.

They placed the grated cauliflower into a microwave-safe bowl, stirred in the tablespoon of oil, covered the bowl tightly with plastic wrap, and cooked for about 3 minutes. And viola! Super easy, delicious texture with distinct rice kernels, and clean flavor, very similar to the steamed version, minus the mess of the cheesecloth.

Epinion: For the easiest and cleanest white-rice—esque cauliflower, use the microwave.

Finally, they tested high-heat methods of cooking the cauliflower, heating up the olive oil in a pan and sautéing the grated cauliflower until lightly cooked. The taste was much richer than the microwaved cauliflower (or any of the boiled/steamed versions), but the cruciferous flavor was much stronger.

Epinion: For a sweeter, more cauliflower-forward rice, sautéing is a great option.

For the final test, they tossed the grated cauliflower with the oil, then roasted it on a baking sheet at 400°F for about 12 minutes. This version had the sweetest flavor, thanks to the caramelization of the cauliflower. But again, that earthy, cauliflower funk was much more apparent than in other cooking methods. Cauliflower rice made this way makes a great side dish on its own, seasoned simply with butter, salt, pepper, and perhaps some cheese, but for a white rice alternative, the microwaved rice was the clear winner.

Epinion: For a quick-cooking, caramelized cauliflower side dish, roasting is the way to go.

I can see now that my mistakes were:

Knowing where I failed, plus taking the expert advice of the Epicurious test kitchen, convince me that my next attempt at cauliflower rice is going to be much better!

If you use Facebook and are interested in the things I may not devote an entire blog post to: things like health articles, my favorite recipes, fun drinks, food facts, nutritional information, restaurant reviews, photos and other things that make my mouth water, I have a very active page on Facebook you can visit too: https://www.facebook.com/ThisGirlLovesHerFood

We are well into September and with the month coming into it’s final week, another season begins.  I’m not talking about Fall, I’m talking about Pumpkin Spice Season!

Soon recipes for everything imaginable made with pumpkin, pumpkin pie spice, or any combination of nutmeg, cinnamon, clove, and ginger will be popping up on Pinterest, Facebook, Twitter and menus at nearly every restaurant you visit.  Today I had a pumpkin plain cake donut from Dunkin’ Donuts that was unbelievably good!

As a girl who adds nothing to her coffee but a bit of skim milk, I’ve never understood it, but people lose their minds when Starbuck’s announces that the Pumpkin Spice Latte is back!  In case you wondered, there are 380 calories in a Grande (i.e. Medium sized) Pumpkin Spice Latte.  That’s a lot of calories to commit to a cup of coffee and it doesn’t even have any pumpkin in it!

You can save money, calories and actually include some pumpkin if you use Kitchn’s recipe to make it at home.

Make a big batch of pumpkin spice mix-in: If you like, you can make a big batch of the pumpkin spice base, and refrigerate. To make 8 full servings , cook 1/2 cup pureed or canned pumpkin with 2 teaspoons pumpkin pie spice , 1/2 teaspoon black pepper , and 1/2 cup sugar . Stir in 1/2 cup vanilla extract . Refrigerate for up to 1 week and use as desired. To serve, blend 1/3 cup pumpkin spice mix-in with milk until frothy, and add 1 or 2 shots of espresso. Top with whipped cream and serve.

On a side note, I found out some very distressing news about canned pumpkin today.  Shape Magazine says most canned pumpkin isn’t really pumpkin.  SAY IT ISN’T SO!  “According to a report by Epicurious, the majority of canned “pumpkin” on the market is actually an entirely different variety of fruit. 85% of the canned pumpkin in the world is sold by Libby’s, and they grow their own tan-skinned pumpkin cousin, Dickinson squash, to help meet the demand. The kicker: This squash is more similar to a butternut squash than the bright orange pumpkins you’ll be carving up this fall.”  Not only did the FDA approve this way back in 1938, it’s a common practice among most of the brands.  Hmph!

If you are on Facebook and are interested in the things I may not devote an entire blog post to, recipes, food facts, nutritional information, photos and other things that make my mouth water, I have a page on Facebook you can visit too:  https://www.facebook.com/ThisGirlLovesHerFood