We are well into September and with the month coming into it’s final week, another season begins.  I’m not talking about Fall, I’m talking about Pumpkin Spice Season!

Soon recipes for everything imaginable made with pumpkin, pumpkin pie spice, or any combination of nutmeg, cinnamon, clove, and ginger will be popping up on Pinterest, Facebook, Twitter and menus at nearly every restaurant you visit.  Today I had a pumpkin plain cake donut from Dunkin’ Donuts that was unbelievably good!

As a girl who adds nothing to her coffee but a bit of skim milk, I’ve never understood it, but people lose their minds when Starbuck’s announces that the Pumpkin Spice Latte is back!  In case you wondered, there are 380 calories in a Grande (i.e. Medium sized) Pumpkin Spice Latte.  That’s a lot of calories to commit to a cup of coffee and it doesn’t even have any pumpkin in it!

You can save money, calories and actually include some pumpkin if you use Kitchn’s recipe to make it at home. 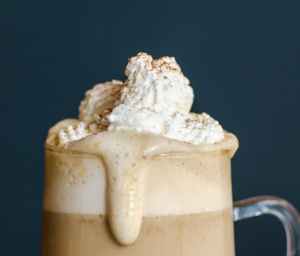 Make a big batch of pumpkin spice mix-in: If you like, you can make a big batch of the pumpkin spice base, and refrigerate. To make 8 full servings , cook 1/2 cup pureed or canned pumpkin with 2 teaspoons pumpkin pie spice , 1/2 teaspoon black pepper , and 1/2 cup sugar . Stir in 1/2 cup vanilla extract . Refrigerate for up to 1 week and use as desired. To serve, blend 1/3 cup pumpkin spice mix-in with milk until frothy, and add 1 or 2 shots of espresso. Top with whipped cream and serve.

On a side note, I found out some very distressing news about canned pumpkin today.  Shape Magazine says most canned pumpkin isn’t really pumpkin.  SAY IT ISN’T SO!  “According to a report by Epicurious, the majority of canned “pumpkin” on the market is actually an entirely different variety of fruit. 85% of the canned pumpkin in the world is sold by Libby’s, and they grow their own tan-skinned pumpkin cousin, Dickinson squash, to help meet the demand. The kicker: This squash is more similar to a butternut squash than the bright orange pumpkins you’ll be carving up this fall.”  Not only did the FDA approve this way back in 1938, it’s a common practice among most of the brands.  Hmph!

If you are on Facebook and are interested in the things I may not devote an entire blog post to, recipes, food facts, nutritional information, photos and other things that make my mouth water, I have a page on Facebook you can visit too:  https://www.facebook.com/ThisGirlLovesHerFood

This site uses Akismet to reduce spam. Learn how your comment data is processed.

On the off chance you have red wine left, did you know you can freeze it? Unless you’ve left it open too long, the wine can still taste as fresh thawed as it did when you first pulled the cork! What a great way to keep from having to open a whole bottle to get a small amount to #DeglazeAPan
If you are lucky enough to trip across this #WineEnthusiast 96 Point rated #Block8 #BienNacido #Foxen #PinotNoir, like @funlisawineoh did at @delmonicosteak last week, grab a bottle! Retail is about $65 and this wine is fantastic. #Earthy #Cranberry #Tart #Raspberry #SpicyFinish #BobsFineWine #BobsFineWines #BobsFineWineSC
Tri-tip, spinach ravioli in homemade spinach Alfredo sauce on a bed of fresh spinach with a glass of #WesterlyWines #côteblonde - yummy 😋 #thisgirllovestoeat👱🏻‍♀️ #funlisawineoh 👱🏻‍♀️🍷 #foodandwine #homecookin
Good thing I #AirFried the chicken before I broke the bone in my wrist & strained all my hand/wrist ligaments today 🤬 #ThisGirlLovesToEat #AirFryerChicken #KetoGourmet 👱🏻‍♀️
Homemade #KetoFriendly #StrawberryIceCream #thisgirllovestoeat👱🏻‍♀️ #CoolTreat View the recipe at the link in my bio: Nutrition Information (8 – 2 oz servings)
I love a drippy #friedeggsandwich. Knowing I have a yummy #KetoBread option #SolaBread & that I can choose between using olive oil spray and butter, depending on my fat needs for the day, to make it #KetoPerfect, makes me even happier! View the recipe link for Quick & Tasty Keto Breakfast Sandwich in my bio! #KetoGourmet #LisasKetoKitchen #ThisGirlLovesToEat