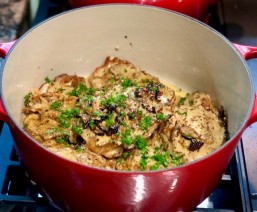 Anyone who thinks living a #KetoLifestyle or following a #KetoDiet to lose weight has to be boring and consists only of mass quantities of cheese, bacon, and butter, couldn’t possibly be more wrong!

This chicken thigh recipe, adapted from one featured on The Food Network by Ina Garten, has every component of Keto covered (High Protein, Moderate/High Fat, Low Carb) with flavor to spare!  Served alongside a pile of arugula & spinach tossed with lemon juice, olive oil, cracked black pepper & shaved Parmesan and a mound of creamy ricotta mashed cauliflower, it’s certainly far from boring! #ThisGirlLovesToEat

Liberally season both sides of the chicken with the sea salt and pepper.

Heat 2 TBLS garlic olive oil over medium heat, in either a 10-12″ cast-iron pan or stove top dutch oven.  I used a 5.75 qt Le Creuset dutch oven.  When the oil is hot, place the chicken in the pan in one layer, skin side down. Cook over medium heat for 15 minutes without moving, until the skin is golden brown.  If skin gets too brown before the cooking time is up, lower the heat slightly.

Turn the chicken, add the onions to the pan, it’s ok to add some under the chicken, and cook over medium heat for another 15 minutes, stirring the onions occasionally, until the thighs are cooked to 155 to 160 degrees and the onions are browned. Transfer the chicken (not the onions) to a plate and allow to rest uncovered while you make the sauce. If the onions aren’t browned, cook them for another minute.  TIP:  I took the chicken and moved it to a smaller dutch oven so that I could make this before the sides and keep it warm with the lid until it was time to serve.

In a 2 Cup bowl/mixing cup, stir together the mustards, Crème Fraîche, and 2 TBLS of the wine.  Set aside.

If you have an excess of chicken skin and/or onions that burned or stuck to the pan during the browning stage, deglaze the pan with the 1/4 Cup of white wine.  Scrape up only any burned bits and scoop them, with the tainted wine, out of the pan and discard.  Add the sauce ingredients to the pan, making sure to use a rubber spatula to get all of the flavor into the pan. 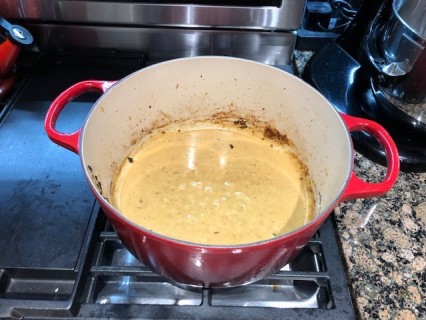 Cook and stir about 2 minutes, over medium heat, then immediately pour over the chicken you’ve moved to your smaller dutch oven OR return the chicken and the juices that settled back into the pan.  Cover until ready to serve.  Spoon sauce over chicken and sprinkle with chopped parsley when plating, if desired.

This site uses Akismet to reduce spam. Learn how your comment data is processed.